Neuhoff Mixed-Use Development: Beefing up Nashville's Connectivity to the Cumberland

From Oracle and River North to the new Titans stadium, Nashville's East Bank has been the hot topic in Music City. Currently under construction on the Germantown side of the river, Neuhoff Mixed-Use Development has shown up to the party early engaging the Cumberland River like Nashville never has before. This development is a mix of reuse and new construction with some beefy history. 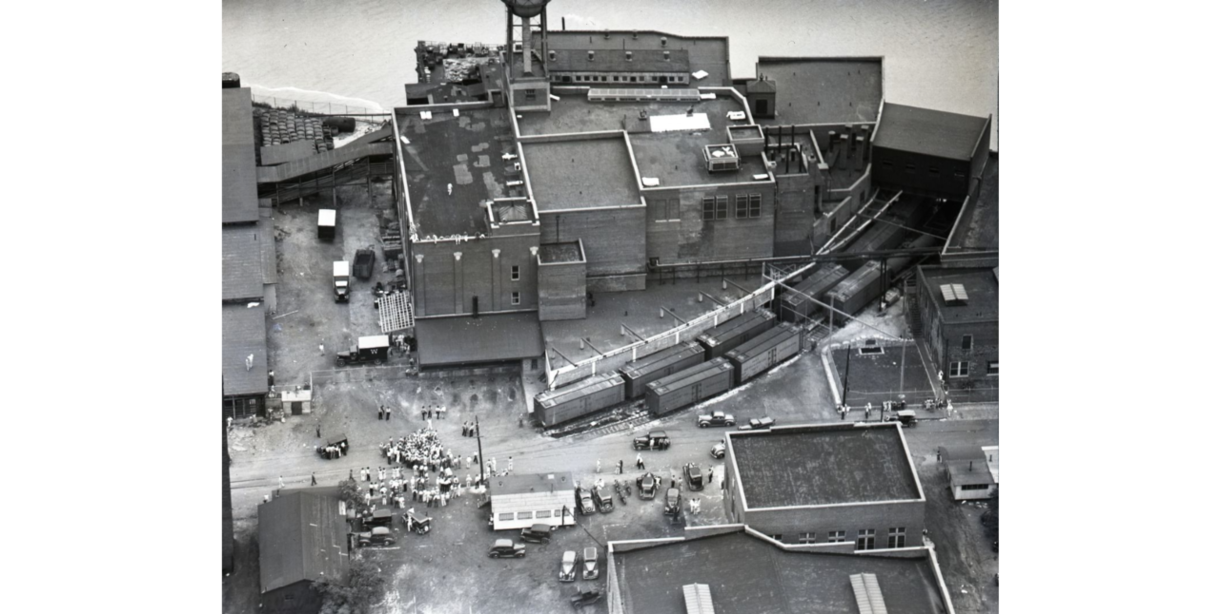 Around 1906, a German immigrant named Henry Neuhoff opened the Neuhoff Meat Packing Plant overlooking the Cumberland River. From 1906 to 1950, the buildings expanded to a 700,000 SF complex. The company kept live cattle in a parking garage-like structure across the street from the plant. They would then lead the cattle up massive ramps to the top of the building where they were slaughtered. The cows were then proccessed as they made their way back down towards the basement and the loading docks. Different shoots, slides, processing equipment, and tongue grade scale charts remained in the facility to show that the company wasted no part of the cow. The plant has been vacant since the plant closed in 1977.

With the project in the works for about 20 years, for the past two, the general contractor for the current development of the site JE Dunn has explored the patchwork composition that resulted from the initial 50-year growth. Artifacts of the plant and newer additions like trees growth through walls and graffiti are still abundant throughout the space. 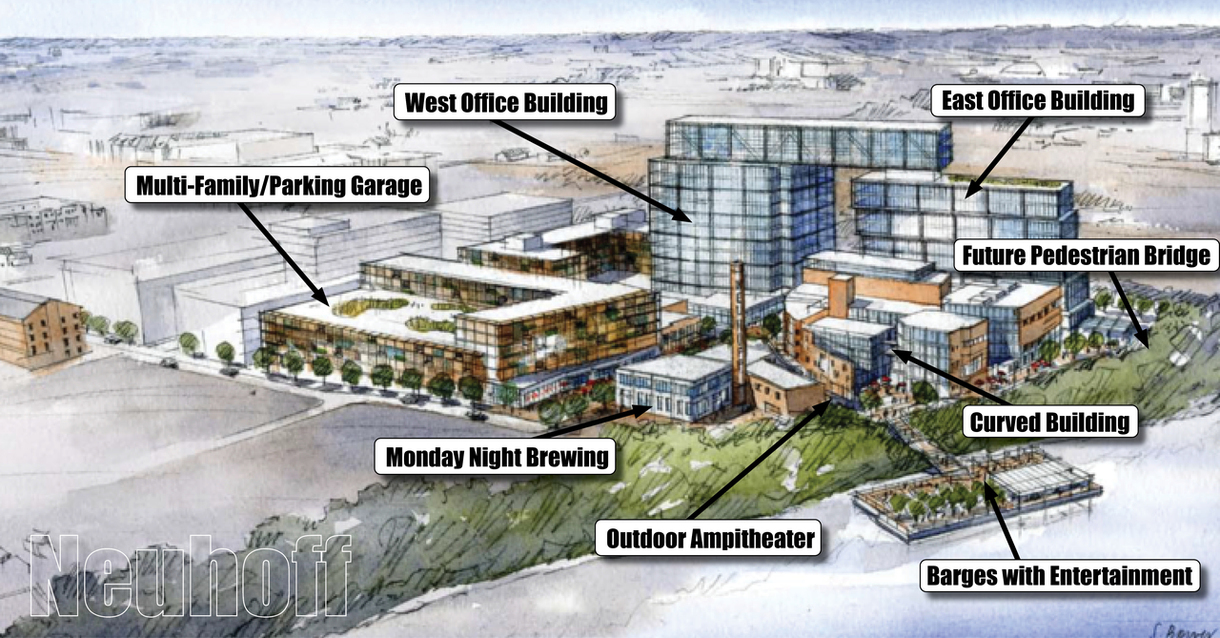 The different projects in the development, referred to as "blocks," are being built concurrently with the last block, the multi-family portion, set to finish in about three years. Monday Night Brewing's Taproom was the first part of the project to open to the public Labor Day weekend, and it is located under the iconic smoke stack. The construction team has already shortened, cleaned up, and painted the development's name on the stack for it to remain as a beacon for the development. For now the brewery just has the taproom open but will eventually build a brewery in the old boiler room next to the space. Between the brewery and the curved building, the construction team has demolished an existing building and will eventually build an outdoor amphitheater leading down to the river in that space. Within the Curved Building, the industrial reuse space will house food and beverage on the lower levels with office space on the upper levels. Just north of the Curved Building, the team is building the East Office Tower which will feature a cantilever upper section that will eventually link to the West Office Tower after its completion in a later phase. Just west of the brewery there is currently a massive hole where the construction team is still blowing out rock to build the development's major parking garage and multifamily space. A road will divide the multifamily block and the West Office from the rest of the development, and the major shared utilities line up underneath.To engage with and properly take advantage of the Cumberland River, the owners of the property have purchased barges which they will use to add further entertainment such as a swimming pool and restaurant. Significantly, Neuhoff is the site where a pedestrian bridge will be built in the next couple of years across the river to connect to the Oracle complex on the East bank. Nashville-based Smith Gee Studio has been leading the design for the renovation of the Curved Building and the brewery, and HKS Architects from Atlanta has designed the rest of the blocks. ICT has been the MEP engineer for each of the blocks under the different architects. 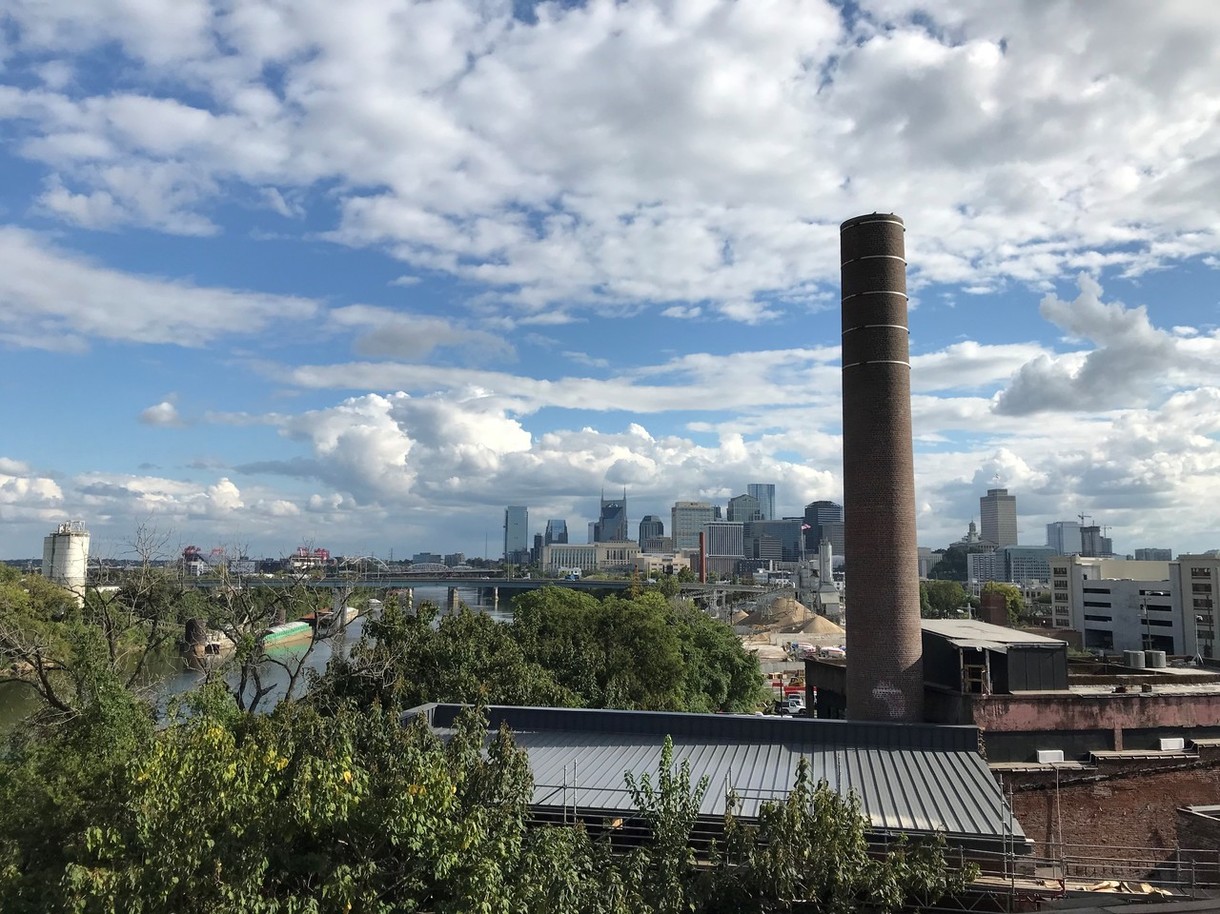 View of downtown, existing smoke stack, and top of Monday Night Brewing from roof of curved building as of 9/16/21 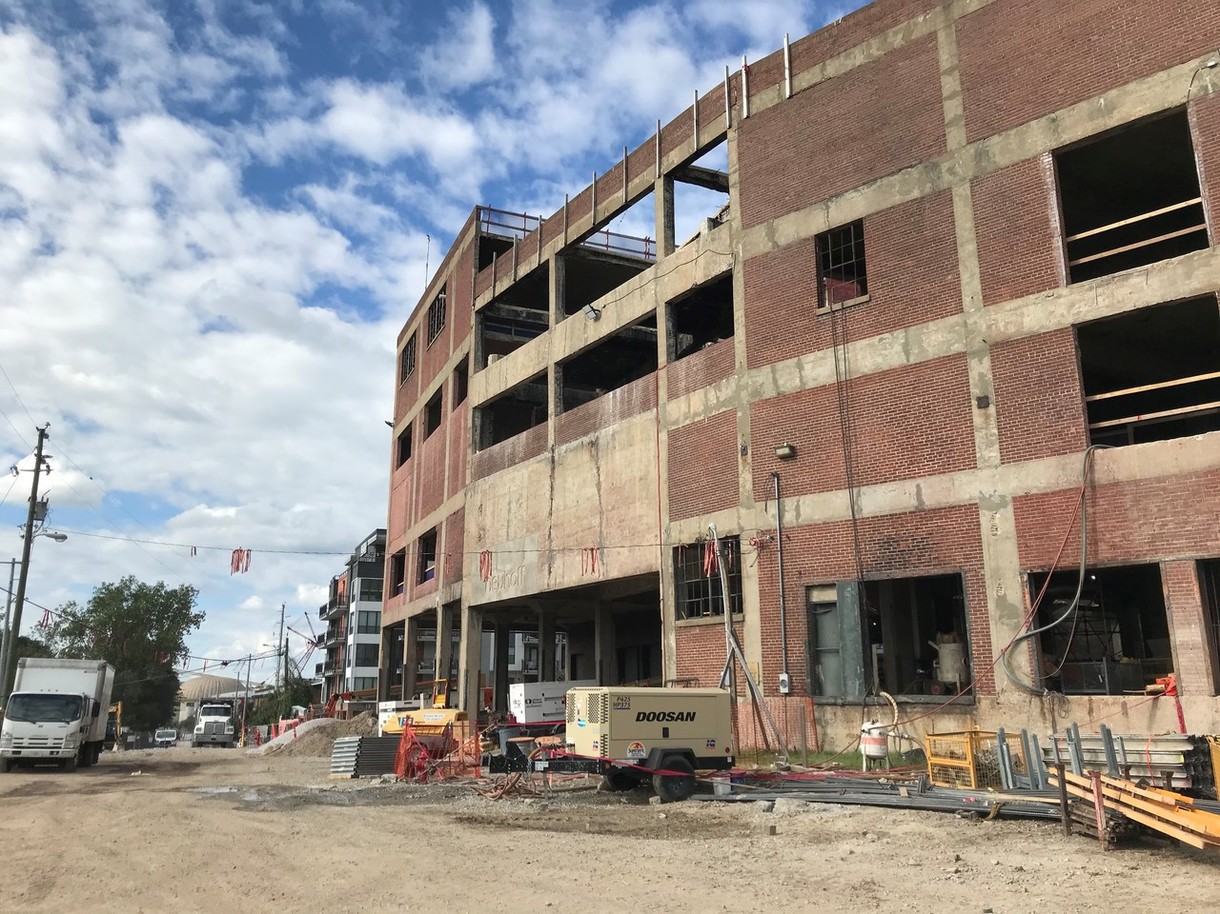