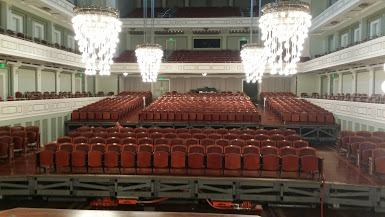 Sometimes issues arise where conventional solutions just will not work.  This was the situation presented to I. C. Thomasson Associates by the Nashville Symphony at the Schermerhorn Symphony Center.  This magnificent architectural landmark in Nashville, Tennessee hosts a plethora of events ranging from weddings to the filming of shows.  The symphony’s exterior shows Neo Classical Architecture with contemporary entities as the 29 foot columns lead to double-barrel vaulted ceilings. To achieve the functionality of such a facility, one must take into account the design feats put into place to maintain such a unique infrastructure.

After three years of construction, the facility formally opened in 2006.  Four years later in 2010, the facility flooded.  Part of the structure and the vast majority of the mechanical, electrical, and plumbing systems had to be replaced.  I. C. Thomasson Associates, Inc. was the engineering firm contracted for the MEP Engineering to enable the reopening in eight months.  Once the facility was again operational, new issues were presented: the hardwood floors in the main hall were being damaged as well as the newly poured concrete floor in the basement.  The question remained, what could be causing the issue, and how can we resolve it?

Looking further into the problem, it is important to know that the seating in the main hall is configurable. The seating can be moved into position to maximize seating capacity or moved into the basement to open the cherry and hickory hardwood floor. This was accomplished by dividing the concert seating into eight sections which roll onto a lift and are then lowered into the basement or raised back to the main floor. Each of these “seat wagons” weighs approximately 35,000 to 40,000 pounds which is distributed on steel rollers powered by a single drive motor on each allowing for horizontal travel.

The staff suspected that the flooring issue was linked to the seats but was unsure how to solve the problem without completely removing and rebuilding, causing months of downtime for the facility.  ICT was contacted to confirm the root cause and determine a solution. Several sources were found linking to the problem. First, the steel rollers did not distribute the weight evenly, resulting in the crushing of the hardwood. Second, the hardwood and concrete were not perfectly level. Laser measurement revealed the floor varied as much as two inches resulting in point loading of the rollers which exacerbated this issue.  Lastly, the crushing of the concrete by the extreme weight was damaging the steel rollers, essentially turning each of the rollers into giant wood files. The combination resulted in a compounding of the damages to the floors and seat wagons.

The first option was to add rollers to better distribute the weight.  However, this was not viable due to the lack of surface area across the bottom of the seat wagons.  Even if area was available, this did not resolve the point loading effect of the uneven flooring or the hard surface of the rollers.  The second thought questioned if we could float each of the wagons on air. ICT’s engineer had seen this process for moving large stamping and injection molding dies on uneven and weak concrete floors.  Nonetheless, there were other issues:  Where would we get the air?  Would it work on hardwood flooring?  What about the gap between the floor and the lift?

ICT was able to work with equipment vendors to design a system to resolve all of these issues. The air compressor had to be low noise to prevent the transfer of noise to the main hall, while providing enough air to power the air casters and small enough to fit on the freight elevator to the basement.  The air casters must traverse the floor and the gap onto the lift without additional materials to span the gap each time the wagons moved.  The installation had to be manageable, quick, and safe.  Lastly, the system had to be user-friendly without the need for additional labor. ICT was able to develop a solution to fit the client’s needs. 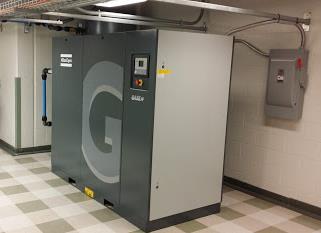 ICT started with an air compressor in the basement plumbed to two disconnects, one on each level to make connection quick and simple. To speed up plumbing installation and provide ease for future maintenance and expansion, quick connect style pipe was used. Each seat wagon was then outfitted with air casters which were installed by replacing a minimal number of rollers. These were manifolded to a single point of connection on the wagon. Within four weeks, the wagons were in motion.

Today, the air casters lift the units and evenly distribute the weight across the floor on air.  The Symphony has resealed the basement flooring and is in the process of repairing the hardwood in the main hall. ICT’s solution resolved not only the damage resulting directly from the units but also collateral damages, such as lost items dropped between units that were then embedded into the floor. Now, as the air caster approaches such items, they are simply blown out of the way as the seat wagon hoovers past. The crew has even mentioned how much quieter and smoother the transitions are with the new system and the minimal effort added to the changeover. 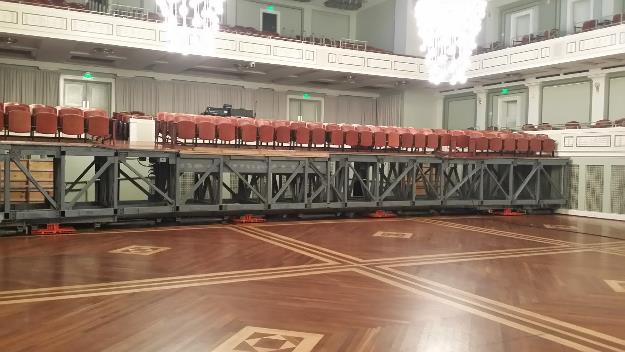 This project is an example of how we can partner with great clients to help resolve major issues using our engineering and project management expertise.